Given what happened in Hesston, Kan., last week, this iteration of Exercise Your Freedom could hardly be more timely. We as individuals may work hard indeed to be aware of our surroundings and abide by the law, but exercising our defensive freedoms often ends precisely where we must spend a third or more of our time—the doorway or even the driveway of where we work. Once inside, we’re trusting to luck.

Jimmy Graham, founder and president of Duty To Act, and now director and lead instructor of Active Shooter Response Training Center, is trying to change all that. Not accidently—as you’ll see—he has a very precise notion of “how.”

A1F: Mr. Graham, thanks for this inside look at what the Active Shooter Response Training Center in Centennial, Colo., is all about. A little background on you, if you would?

Jimmy Graham: I spent 15 years as a U.S. Navy SEAL—eight on active duty, and seven as a reservist. I also worked for the United States government in those Reserve years, and specialized in training and executing diplomatic or other personal protection assignments. I had numerous deployments abroad.

Benghazi—the Libyan Embassy fiasco of the movie “13 Hours”—narrowly missed me, or rather I missed it between deployments to Libya. Although all SOF training has a huge “readiness” component, few things could bring this lesson home for non-military, non-SOF folks like that did: Delay, and physical as well as mental unpreparedness, can have terrible consequences, and not just in places like Libya. Examples here at home are thankfully rare, though the 24-hour, repetitive news cycle makes you think otherwise.

When they do occur, the window for reducing the severity—or stopping an incident altogether—is very short.

JG: Active shooter situations rarely last more than three to five minutes, but response time in urban areas is often twice that. If official “help” arrives, it’s rarely less than eight minutes, and that’s pretty much good luck. Ten to 12 is not uncommon. There is no reason that law-abiding citizens with the proper training can’t hold out for that long. Law enforcement can and should clear the building, but to give these obvious bad guys their own way until then isn’t just callous, it’s unnecessary. That’s the whole purpose of Active Shooter Response Training Center.

A1F: To prepare organizations to respond to this threat?

JG: Individuals as well, but corporations, church communities and educational entities are the big drivers. Sooner or later (and there are a couple of cases in the courts at present), a judge or jury is going to say: “You can’t enforce defenselessness in the workplace, and then take no meaningful precautions to fill the gap.” There’s no company in America that wants to be first on that list—to be taught this lesson the hard way. We live in a litigious society, and it’s making us do really stupid stuff. We’re obsessed with bad legal what-ifs as though they were the worst things that could happen. The plain facts of a military and protective career like mine make that idea absurd: Much, much worse can go wrong, and far more quickly.

We used to be good at taking care of each other. Now, though, that impulse to care, and the freedom to forcefully act on that caring are constrained to the point where it’s getting people hurt, even killed.

We’ve got to stop pretending it’s a surprise, too. Foundational pieces of our shared morality have been removed. There will be consequences. If we want to prevent the ugly ones, we have a duty to act: To us, that isn’t a pun, but a principle.Most CEOs or other leaders don’t realize the number of resources they actually have at their disposal.

A1F: How do organizations get started, then?

JG: By letting us in the door. <<Laughing>> Seriously, we understand the apprehensions, and they are natural, even wise to some extent. But we bring in techniques and partners with proven methods at the individual and organizational level. We adapt those skills, thought processes and action plans, many of which have been vetted for 20 or even 30 years at “Tier 1” in military and law enforcement circles. Combined with the commitment to get and stay prepared, a formidable defensive, protective capacity is the result. The goal, remember, is to buy time for the arrival of law enforcement.

A last point: Most CEOs or other leaders don’t realize the number of resources they actually have at their disposal. Our process fits those willing volunteers into a framework where they can deal with the threats they might actually face. We base our preparation on what we’ve seen in actual events.

A1F: We can hardly wait to see it. When does the Centennial, Colo., facility come on line?

JG: In a couple of weeks (late March). We’re looking forward to having you there.

A1F: Count on it. And thank you for your service.

Editor’s Note: We’ll visit again with Jimmy Graham and bring you more information about Active Shooter Response Training after the opening of the new facility (affiliated with the Centennial Gun Club, Centennial, Colo.) later this month. 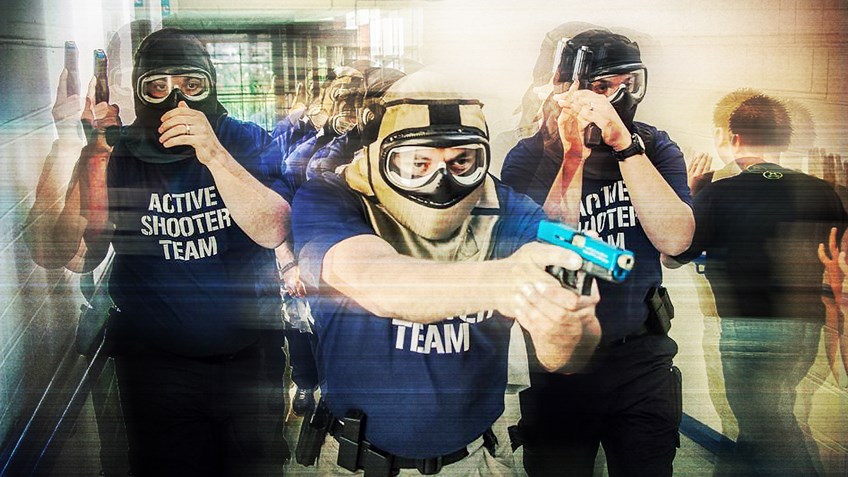