ONE IN A BILLION SHOT

9 NEWS (DENVER)- ONE IN A BILLION SHOT

A closer look at the ‘one-in-a-billion’ shot

The shot is being called “one in a billion.”

The shot is being called “one in a billion.”

“I don’t know that that can be done again,” said Jimmy Graham, director and lead instructor of the Active Shooter Response Training Center in Centennial.

Graham is talking about the shot fired from the gun of an off-duty Jefferson County Sheriff’s deputy in January that lodged in the barrel of a suspect’s gun.

“I’ve never seen an instance where the bullet actually traveled backwards back down and contacted the bullet,” Graham said.

On Jan. 26, Deputy Jose Marquez was visiting his girlfriend’s apartment in Aurora when he was approached by two men in the parking lot who tried to rob him. The men started shooting and Marquez fired back. One of the bullets Marquez fired traveled down the barrel of the suspect’s gun, disabling it.

So, was the miraculous shot luck or skill? Jimmy Graham said good training likely improved Marquez’s chances of hitting such a small target.

“He presented and he aimed for center of mass and he just happened to hit down the barrel of the gun which was effective,” Graham said.

Graham did his best to recreate the shot at the Centennial Gun Club Thursday afternoon. He set up a target depicting a man with a gun about 10 feet away, drew his handgun from his hip and fired three shots in rapid succession.

“Got one, two, three,” Graham said inspecting his target. “We were able to put in there three rounds.”

Graham managed to hit the barrel of the gun on the target, but he doesn’t compare the demonstration to the life or death situation Deputy Marquez faced in January.

“I consider myself a decent shot, but under those conditions, I don’t know that that can be done again,” Graham said. 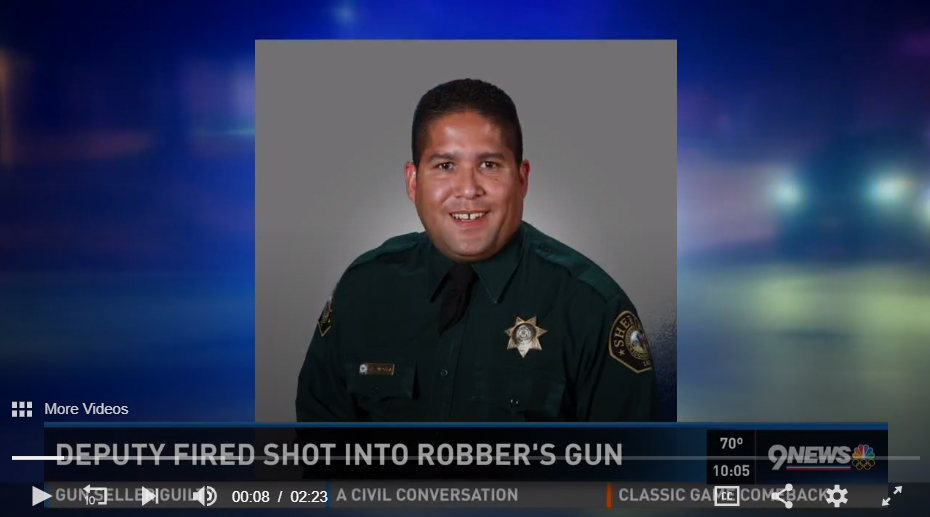 ← WHAT TO DO IN AN ACTIVE SHOOTER EVENT TAKE3: ACTIVE RESPONSE →